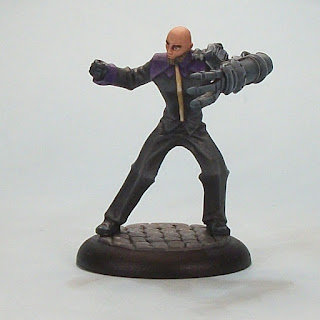 And another one. Not the best pictures in the world, but I am pretty pleased with this one, and it was fairly quick to paint. I truly believe their is more depth to the 'black' body suit than the pictures show, but hey I am biased!

Lorenzo Cortes is (yet another Warrior), and builds upon the previously completed Wissenschaft characters. I can now field a Level 200 Wissenschaft Organization-based Party. So time to start building up an opposing force. The Wissenschaft Party that I envisage will include Dereck Shezard as its allowed Wanderer.

Lorenzo uses the purple motif that the other Wissenschaft minis I have painted so far have incorporated. I hope it helps tie them together, and while it may not feature too prominently or indeed on all that Organization, I see it being incorporated into the next few I have in line.

I am very much looking forwards to playing Anima Tactics, and I think i could be on course to do so by March all things permitting. 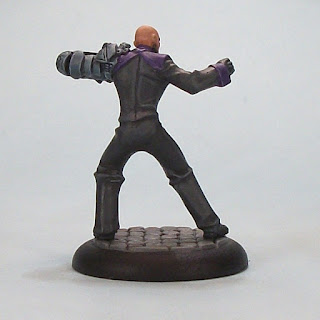 Note, yes I have acquired more to add to the list, but at least I have stayed in line with a painted percentage increase!
Posted by pulpcitizen at 11:03 2 comments: 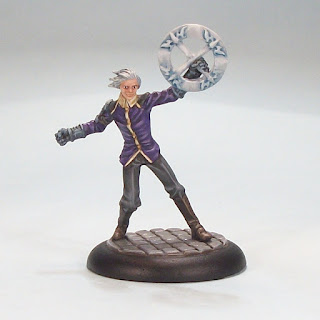 Wait a moment; "Seventh you say? I count only six!"

Astute readers may have noticed only five preceding posts of painted minis. Well I finished my sixth on Sunday, but as it is part of a Team, it won't be shown until the other part of the Team is finished.

So on to this, my seventh as I said. This model is my first Agent; Agents are non-unique characters that can be fielded in multiples depending on the size of game (usually 1 per 150 Levels). That restriction stops spam I guess more than anything. Agents are customizable, and each Organisation's specific Agents has particular options available. Those options sometimes change the Faction (Light, Dark or Neutral) or Category of the Agent, however Wissenschaft Agents's are always Neutral and Prowler. A basic Agent is worth 20 Levels and can have a combination of options up to 20 extra Levels.

The models have some options for parts/construction, and each Organisation pretty much has male and female options available (same rules for each), so variety is easily achieved. 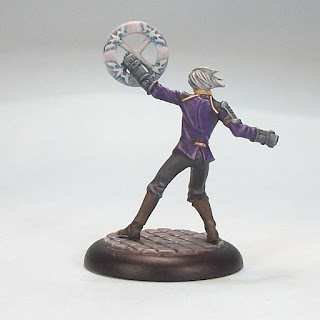 This was finished quite quickly, and I am particularly happy with the blending on the trousers, which were painted with the same approach as those on Clover. I think the colour scheme works well and so I have the nucleus of a small Party now, based around Wissenschaft: Hiro; Dereck Shezard; Wissenschaft Agent. That totals 150 Levels - not enough to qualify for an Organisational Advantage (which kick in at tiers of 200 Levels), but enough for learning the game I reckon. Time to start working on filling out the opposing Party then! 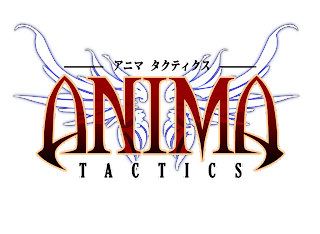 A New Year starts and I thought I would take a quick look back at the year gone by in relation to my minis hobby blogs.

2012 saw my third minis blog launch – Anima Tactician. I had high hopes for quick momentum into this new project which soon evaporated as I hit yet another painting slump in all genres.
2012 also saw a downturn in my overall minis painting, albeit with a surge in the final month (I painted 25% of all minis I completed last year in that one-month period). The year before had seen me paint more zombies in a short space of time than I thought likely.
What did help at times last year were the Painting Challenges I agreed with Rob. Now I do not have the stamina for something like LAF’s Lead Painters League, but those month long challenges helped a lot, which is good – expect more in 2013.

On to the minis and the blogging then.

Now I know one factor which impacted this painting and blogging was stepping up my involvement in Pulp City, and with the bulk of that work completed I am setting myself a goal to pain more minis in 2013 than I did in 2012, and similarly blog more this year than 2011 (2010 was a high point I am unlikely to emulate alas). That means I will try and keep all 3 blogs active, and aim for around 15 or so posts per month across all 3. Posting this on all 3 does count 3 times over!
Anyway, thanks to everyone who stops by and takes a look, or has a read; I promise more blogging in the year ahead and hopefully stuff of varied interest. Stay tuned! And feel free to comment and say what you would like to see.
Posted by pulpcitizen at 03:32 No comments: