Been a while hasn't it? At least it feels that way to me. I hit a brief painting slump (back pain limits my motivation and capability to paint from time to time which is what happened over the past week or so), so this took longer to finish off than I hoped. I say 'finish', as I have just realized there is a little more to do on the sword pommel (10 minutes wok tops).

Janus Faith is a master of numerous fighting styles, who has been granted lost loggia technology in the form of his sword and armour, and who know serves at the behest of the new Empress, albeit with some reservations about the Empire itself.

His abilities make him more of a 'tank' than anything, designed to receive an Attack and then hit with with his Special Attack. Keeping his Action points topped up while maintaining his defensive Upkeep ability (Absolute Defense) will take some consideration I imagine. 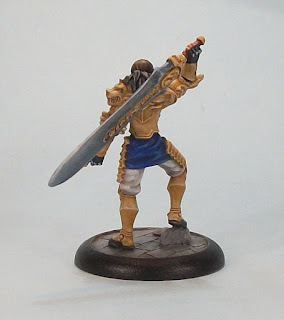 Janus Faith is painted as the blue-print for my Empire colour-scheme: blue tunic; white trousers; gold armour and trim. The fluff cites the highest ranking Empire as wearing white, but I am going to keep the blue/white/gold on all as far as possible (with some exceptions like Samiel) simply as I like the combo.

Getting him finished makes me enthusiastic to get some more done soon and hopefully get some games in before too long. I have a load more figures in the pipeline for Anima Tactics, including a lot of Empire. I hope to finish basic Empire and Black Sun Parties within the next few months, while adding to other stuff I have also.

In terms of Advantage Cards I am thinking of things like Supernatural Armor; Primal; Clock of Chronos.

Janus Faith is a member of Team Cerberus Division with Vayl and Daniella Meris, so I guess it would be a good idea to get cracking with them sooner than later. However, being a painter of whim rather than determination, 'sooner' could well turn out to be 'later'... 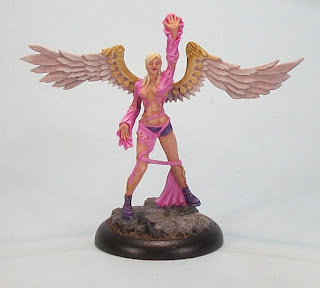 The Elhaym, also known as Maidens of Light, are light elementals, believed by some on Gaia to be angels.

This one is my second Summon unit, (after the Wrath of Nature), and to be honest I am less pleased with the painting on this one than the previous Summon. I believe that sometimes a mini just does not turn out how you want or expect, even with awareness and acceptance of one's limitations as a painter. Maybe it is the choice of painting in pink, which is a colour I am still learning to work with, but I found this a struggle to finish. Admittedly I did rush it a bit at first in a desperate bid to finish for those recent games, but even so I found it a struggle and want to paint another to do a better job (hopefully!). Whatever the reason I just wish this was better.

I really like the model (and before you ask, yes I have dropped it already, and yes, the wings did fall off...), I just don't think it is among the best Anima Tactics minis I have painted so far (not that there are too many to choose from...).

As I start to accumulate more painted Summons, it highlights the need to get some more Summoners painted up. I currently have Valis Ul Del Vilfain and Sarah Reindhold, but the latter is a poor Summoner choice in my humble opinion, so more options are necessary. I do have Genma, Covel and now Belith in the painting queue, however that can be a movable feast as to what gets to the front of the queue and gets finished, so who knows which will be finished and when. 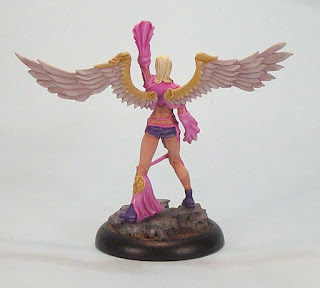 I think Summons are one of the cool things that sets Anima Tactics apart from a lot of other low-model count skirmish games, so are very much something I want to make use of and have a variety of options for.

Game-wise I have yet to see enough yet to judge how effective I think the Elhaym may be. I was very impressed with the Wrath of Nature in the game in which we used the Summons, but it may be that the Elhaym is trickier to use effectively - time will tell!

Not too much to say on Advantage Cards, except that while Summons cannot usually have them, Familiar is probably a must-have in most situations (Optional Leader Covel and maybe Genma excepted).

On the painting front, well despite me wanting to get some more Summoners painted, I reckon the most likely unit to be completed next will be Janus Faith as I managed to get quite a bit done with him over the past few days. 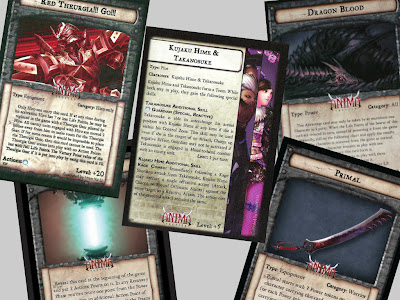 One of the Party-building features of Anima Tactics is Advantage Cards, which represent specific upgrades that players can use to tailor their force, meaning that two Parties with the same miniatures could actually play a little differently simply based on the cards chosen.

For regular players, this adds depth. It adds a strategic decision-making element beyond list choice alone. It allows fine-tuning, as Advantage Card Levels are finite, and the number of cards that can be selected is limited.

That depth though, can lead to a bewildering array of options for casual gaming. As a Pulp City player this is a problem we saw with Resources in that game, that the 'cool' add-on may not be casual gamer friendly, especially as some are very text-heavy. That said, arguably a regular player will always have some degree of presumed advantage (no pun intended!) over a casual player since they will be more familiar with a game's nuances and idiosyncrasies.

In all though, I do feel Advantage Cards can provide a fun extra dimension that does not break the game with any kind of auto-win strategy; they are good, but none are that good - there are still tactical decisions to be made as games play out.

A very useful resource for Advantage Cards is the Anima Tactics Oracle: follow this link.

Maybe as I post up more painted minis I will try and post which Advantage Cards I would favour and why; I may even go back to some earlier posts. Stay tuned!
Posted by pulpcitizen at 23:40 1 comment: