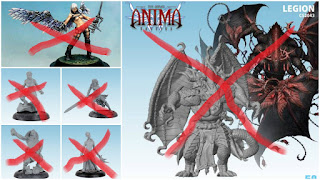 A fan asked Ninja Division about restocks of minis:


"Are the out-of-stock Anima Tactics minis on the webstore now gone for good?"


And this was the reply from Ninja Division:
(source link)


So it looks like whatever supplies are available are currently the last remaining copies of the various minis. Taking a brief look around the internet suggests availability is very reduced for much of the range compared to this time last year.

It also means that the last few releases (Sharsha, September, Nimrod and Anaximenes) may be among the rarest minis for the game.

It could be that Cipher Studios plan to move ahead separately from Ninja Division, but that does not seem likely.

What seems the case is that the promised Legion and Limited Edition Celia are not going to appear. I have asked about those two minis specifically, and not received an explicit answer from Ninja Division.

I accept that this is speculation, taken from the information available, however it means I strongly believe the first era of Anima Tactics is pretty much done except for the arrival of The Bearer and The Nameless miniatures as part of the Gate of Memories Kickstarter.

I retain some hope for a future of some iteration of the game, and I hope that somehow the existing characters make their way into any hypothetical future edition, even if only in the form of game rules if the minis won't ever be produced again.
Posted by pulpcitizen at 04:17 13 comments: 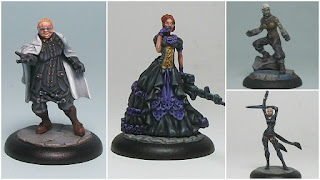 On the plus side, I was especially please with how Adolf Brunner and Cordelia Rosalind turned out.

The wind was knocked out of my sails by the Cipher Studios announcement early in the year - my enthusiasm dwindled to almost nothing. I still want to finish the project, but 2018 is probably unrealistic now.

I have set a much more modest goal for 2016 than 2015, aiming to paint 12 units, or an average of 1 per month. Hopefully that target can be met and the project gets back on track in some form.

There is the possibility of an unofficial UK Ninja Division tournament in 2016, possibly including Anima Tactics. Add to that, there are rumours of a return of Anima Tactics in 2016 via a new edition, possibly under a new name, but what that means for the existing sculpts and their use in the rumoured new game is really unclear as yet.

Onward and upward.
Posted by pulpcitizen at 03:25 4 comments: