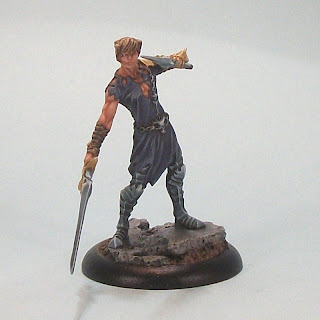 Not much I can say about Drake, as being a Saga III or IV character, he is not covered in the first rule-book (Sagas I and II).

His blurb as listed on Anima Tactics Oracle cites him as a vagabond mercenary warrior, possessed of some form of the Blood of the Dragon, the same power that surges through the veins of Dereck Shezard.

Drake is part of Team The Condemned Lovers along with Cenette; the pair the bloody warrior and the on-the-run princess. I have yet to pick up Cenette, but inevitably will do in good order!

In game terms, at 50 Levels Drake looks like a slightly watered down alternative to Dereck Shezard at first glance: both are Neutral Wanderers; both Warriors; similar emphasis in terms of characteristics relative to their respective Levels. In addition Drake has an Action called Dragon Overdrive which is functionally like a weakened but cheaper to use version Dereck's Neo Genesis. however there are differences, with Drake backing up his Actions with a Charge and Dereck having a Ranged Attack. That said, I look forward to using both in time when I do get some gaming in. 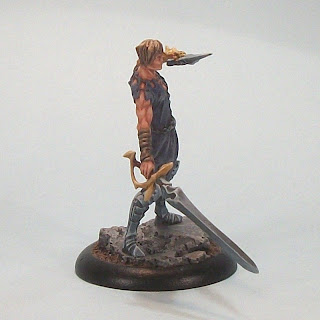 This one was tricky to get my head around in painting and there are some bits I am quite chuffed with, other bits less so, but I am fairly pleased with the overall result. I do think the flesh and 'gold' look better with the model in hand than the photographs suggest.

I will try and turn my attention to getting some more Church models finished to allow me to make up a 200 level Church Organization Party since I can now do a 200 Level Wissenschaft Party (by including a Wanderer). I really, really want to get a couple of Summoners and at least 2-3 summons done soon since I think they will be a fun part of the game.

In the mean-time, stay tuned for my sporadic updates! 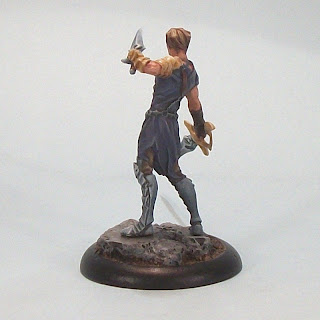