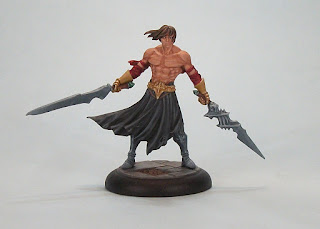 Lostaroth Marchosias is the high executioner for the Church, or something like that; whatever his background (the Saga III and IV book has not yet been released, so I am not sure to be honest), The moment I saw this model I thought: "Yep, he looks pretty bad-ass!"

I think this is the kind of great sculpt that I associate with much of the Anima Tactics range, and a model that looks like he could take some unfortunate enemy down - painfully.

Stats and abilities wise, there are some apparent similarities with Dereck Shezard, although the latter looks like he has a straight up unbuffed more devastating attack against a single target, while Lostaroth Marchosias looks more than capable of taking out a cluster of juicy targets.

My Church Party is building slowly now, and Sarah Reindhold is probably next up for that Organization. Before then though, I hope to finish Bella and Yuki since both are reasonably far along (Bella is very close to completion I feel, but needs some careful attention to complete with some very fiddly straps etc. 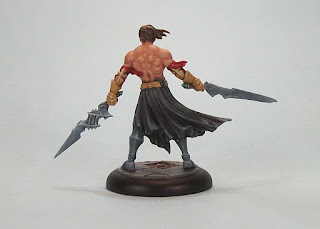 Lostaroth Marchosias was a key choice as he is an Optional Leader, meaning he can be fielded at his base version for 60 levels or as a Leader for 65 Levels. As I build up the collection that will add some depth of options to Party-building.


Running Totals
Anima Tactics Minis: 72 (added: Frederick Adler; Yuri Olson; Claire Adelheid)
Anima Tactics Minis Painted: 8 (the real '6th' mini to make 9 will be counted when the whole Team it is part of is finished)
Painted Minis Percentage: 11.1% (even with the new acquisitions I have made progress - woo!)

Note, yet again I have acquired more to add to the list, but at least I have stayed in line with a painted percentage increase!
Posted by pulpcitizen at 11:35