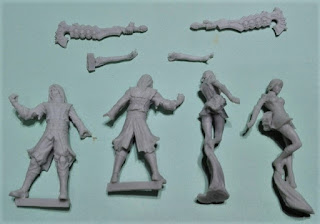 Apologies that the blog has been dormant for so long. My hobby attention has been elsewhere and I failed to meet my small-ish target of of twelve Anima Tactics minis in 2016 and only finished one - due much to the lack of motivation that the lack the new releases or news creates.

In the past couple of weeks a picture has emerged of the casts of the Anima Tactics minis rewards from the Anima: Gate of Memories Kickstarter project. That has res-parked a little motivation for me, but whether it will be sufficient remains to be seen. The Nameless is on the left and The Bearer on the right.

Anima Tactics minis seem to be very scarce now, which is not unexpected. However, Anima Studios (seemingly calling itself Anima Project now) is showing increased signs of life with a Twitter account and a new Forum, and there have been assurances of progress on some kind of return for Anima Tactics which would be marvellous, even if logistically very challenging (I believe that the moulds and masters were with Cipher Studios, so bringing all those existing minis back into the game or a new version of the game could be very expensive).

On top of that, I managed to snag a rare unreleased mini last year, almost completing my collection.

I wait to see what 2017 holds, and i hope to paint more than one Anima Tactics mini in anticipation.
Posted by pulpcitizen at 03:27