Juliette Kaim is the Azur Alliance's greatest messenger, passing on the orders of the Arbiters.

Juliette is also my my first completed Azur Alliance, the first of that Organization like Yuki was for Samael - I really am determined to paint all of this line if I can pull it off, so branching out is one of the key things to enable that I think; that way I can get a small foot-hold into each line-up.

This unit is quite atypical in several ways when compared to the rest of the line. Most units weigh in at between 35-60 Levels, with the majority in the 40-50 range. At 25 Levels Juliette Kaim is a very cheap unit, but one that has a particular function. The knock-on effect of the standard costing is that at 200 Levels you expect to have 4 units, possibly 5 cheaper units. At 300 Levels you expect to have 6, possibly 7 units. The point is that Juliette stands outwith the building blocks of Levels, except when you look a little deeper.

One Party I have in mind is to use her with Team Les Jaeger (The Colonel; Kyler; Rheindhold; and Kirsten). Collectively they come to 175 Levels, allowing Juliette to neatly take that up to 200 Levels. 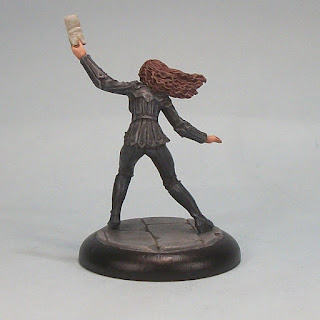 Another factor is that Juliette is all about buff and de-buff. And to maximize her buffing capability she needs to be in a Party with an Arbiter. The Colonel will fulfill that role if used as part of Team Les Jaeger, so another pointer in that direction.

I have read a number of forum comments that Azur Alliance is 'under-powered' compared to other Organizations, but since I plan to paint and hopefully try out everything eventually, that does not deter me. And the idea of a sneaky bunch dressed in black appeals to me a lot!

On the Advantage Card front, well at only 25 levels I wonder whether she would be better left without, allowing another Unit to use those precious few Levels of Advantage Cards. That said, if I was to give her any cards it would be something like: Gnose (meaning no Ranged Attacks or Charges against her from more than 6 inches away); or Nue (adds to the difficulty to detect the unit if it is Hidden, which is important as Juliette needs to be Hidden to use one of her Actions).

On the painting, I am fairly pleased, although the neck frill may get a little more work before varnishing.


As an aside, the current available range stands at 147 minis by my estimate; at my current rate that would around 44-45 months to complete the lot even if they don't release anything else! Time to step up my painting speed methinks! :)
Posted by pulpcitizen at 02:02