Yuki is described as one of the last Ice Maidens, and is my first finished Samael unit.

This mini has been in my painting queue for a while now as I started here, over-painted bits I was not pleased with, then stalled and as usual took things slowly. The thing is I thought this was a stunning mini from the moment I saw it, with a really interesting dynamic with her sat on her own tree, and no weapons etc. My problem as ever though is I struggle to maintain focus long enough to finish minis quickly most of the time (with occasional exceptions). Well she is finished now and I am reasonably pleased with the outcome.

I started to photograph here yesterday, but realised I had forgotten to paint the tiny creature at her back! D'oh! Well that was rectified tonight in short order.

Yuki is a Mystic with abilities that make her very good at locking down and limiting enemy units. In addition to eschews the usual movement rules but can be very fast, possibly one of the fastest units in the game, but at a high Action Point cost with a relatively low AP recharge. She also has a basic Ranged Attack, but I see that as very much a secondary or even tertiary ability. In regards to Advantage Cards, if I was to give her a card I would consider Control Bound (Equipment that boosts the difficulty of resisting her Effects) or Afterimage (a Power that makes her harder to hit at range since she should not be anywhere near the front line anyway); both are Level 5. 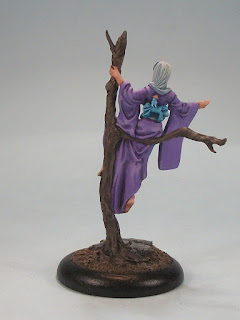 With Yuki being finished, the only Organization I have yet to finish a mini for is Azur, so I hope to rectify that fact before too long. Also the next mini I finish will mean that my next 'Next 10' is also done, so hopefully that will be sooner than later.

On the minis owned front, well they continue to trickle in...