It seems like ages since I finished an Anima Tactics mini so I am glad to rectify that right now. This month has not felt too productive, although I have now painted in just two months (13 models) what I painted in each of three months (January to March; April to June) across all ranges I am working on, so not too bad I guess!

I have turned out 4 Pulp City minis this month so far, which has impacted on my productivity with Anima Tactics. So as I stated up front, I am pleased to have finished another.

Saint Astraega is one half of Team Saint Council with Saint Evangeline, and very much a support unit. As the number of Church units I have completed grows, so to do my options. I am now at a stage where 3 models (Grey; Luzbell; and Saint Astraega) would likely be vying for 2 'slots' in a level 300 Party, and looking at Astraega's capabilities, I think she is edging out Grey, since she may be the model to keep Lostaroth Marchosias in play since I have struggled to keep him alive against Rob in the games we have played; he has definitely been a high priority target! 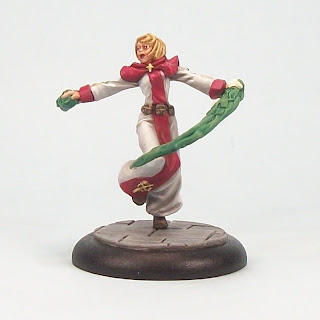 Since the two key Actions I imagine using require 4 Action Points apiece (Astraega's limit), I think a likely Advantage Card will be Clock of Chronos, although once I can field the Team Saint Council, more options will become viable, since Astraega will be able to replenish Action Points through that card.

This one was started a while back painting wise, but kind of got left behind as I was inspired to finish sundry others. I even made a mistake by starting to paint the stems of her flowers magenta before I actually realised they were not flames!

I have started work on a couple of other Church models (Damaris and Saint Evangeline), so as soon as the next one is done, I will do an updated Church Party picture. In the mean-time I hope I can sustain some momentum as I do love this range of minis. 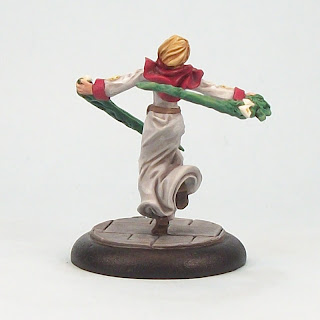