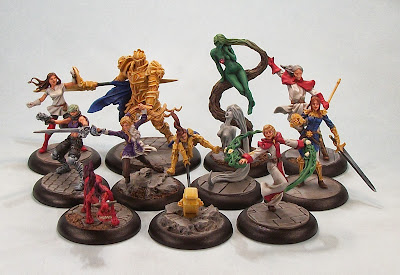 It took around 3 and bit months between the first 'Next 10' and the second 'Next 10', and to my surprise not too much difference for the second to this third 'Next 10'. I thought I had slowed down much more than that time would indicate, but then July was pretty productive in my Anima Tactics painting.

While momentum does feel it has slipped, I hope to pick some up in the next couple of months. Currently I have 112 Anima Tactics minis to paint, and I do not yet have them all, so this remains a big project!

This batch saw a lot of female characters painted, as well as a predominance of Church and Empire. What that bodes for the next 'Next 10' is anyone's guess!

As for the image, next time should see the usual triangle formation return, but the pesky extra spirit thing with Damaris messed that up this time around!
Posted by pulpcitizen at 07:42