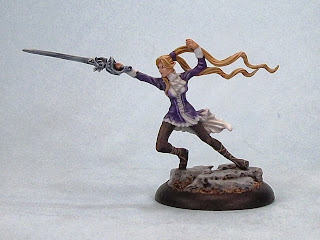 I am glad this is finished at last. It has been stuck in the queue with no motivation from me to finish it for what has seemed a long time. As soon as it arrived (some time before early May) I prepared it for painting, and started some base colours - then just lost all motivation to finish it. It has only been in the last week that the motivation resurfaced, so bit by bit this week I have been working away on it and now it is done.

This is my first attempt at a 'sheer nylon' type effect, and I am quietly pleased about it (even if the images don't show it off that well), while other parts less so - but they are unlikely to be changed now. There are some really fine parts on the mini as the images no doubt show, which I struggled with, but this is as good as I could probably manage without losing patience. And to top it off, the mini has been dropped or knocked over at least twice, requiring repairs and touch ups, so to be honest, I will be glad it is the cabinet! 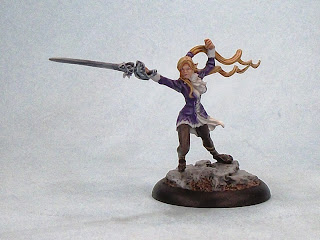 Cenette is one half of Team The Condemned Lovers along with Drake (who was finished back in March), and finishing her represents completion of my first Team proper (since Bella and Aqua are a special case anyway). Cenette's history describes that she chose to leave Rose Island to its fate and pursue the man she loves. And blessed with angelic blood and incredible martial skill, she and Drake make a deadly combination.

In game terms, Cenette looks a little light in the Attack/Damage department, at 5/3; however her actions change that perception dramatically. Her 3 AP Attack is at basic 10 Attack, meaning most models are auto-hit unless they Dodge or have a buff in place. Her special Charge is yet more devastating; it adds +3/+2 and gains +2 from being a Charge, for 10/5, meaning she is very likely to hit due to rolling 2 dice, even if targets elect to Dodge, especially if she can get a buff from another Party member (not to self: I really must paint up Sophia Ilmora), and her Charges can have a single direction change, meaning she can if used right avoid intercepts and tank-like characters acting as speed-bumps. 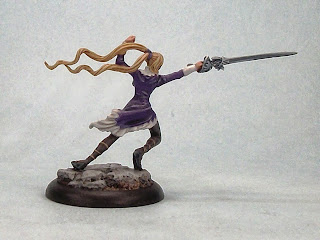 If using her alone, the usual thoughts come to mind with regard to choice of Advantage Card: Primal or Elemental Weapon are obvious options. However, maybe Clock of Cronos to ensure she can use her special Charge just when needed.