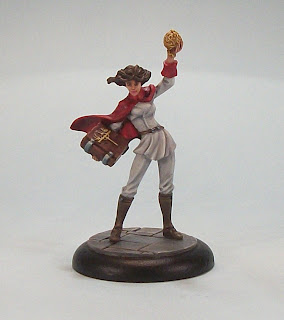 Another one down - number twelve ('gotta collect them all' - I may very well take that literally!).

I understand that Sarah Reindhold is related to the Azur character Reindhold (also known as Alfred Reindhold Webber), but cannot confirm until Saga III and/or IV book is out. Whenever that may be.

In the meantime this is my third Church mini, but has not really been painted towards putting into a Church Party at this time, more simply to keep up my painting momentum. That said, she is my first Summoner, so maybe she will get some use sooner or later. I did mention that I wanted to get some Summoners and Summons painted up, but I have more in mind Samael characters for that aspect of game-play.

Sarah's Actions are all around buffs and de-buffs, and one o the most interesting looking to my eye is her Upkeep Action Nathaniel's Incense which provides a Turn on Turn Life Point recovery. The only way to tell if it is as workable and useful as it appears is to get some games in of course! The down side is her de-buff ability appears to possibly switch off Nathaniel's Incense too. 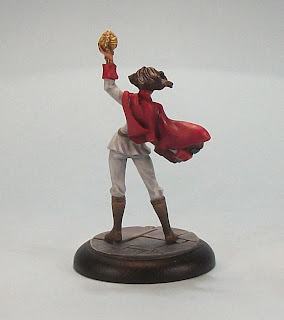 My colour scheme for the various Saints in the Church will be the white clothing or robes with red shawl so their should be some uniformity as they start to appear.

I am not too happy with the face on this mini; the eyes have been done twice, and I am not doing them a third time - they stay as they are. Also the shininess around the red should be taken care of when I can eventually hit my minis with the Purity Seal.


Running Totals
Anima Tactics Minis: 80 (added: Azriel; Alastor; Saint Aestrega; Vayl)
Anima Tactics Minis Painted: 12
Painted Minis Percentage: 15% (that percentage growth has slowed down with recent purchases; I have another 9 minis on the way - so I need to get 2 done just to get ahead again when they have arrived)
Posted by pulpcitizen at 12:59