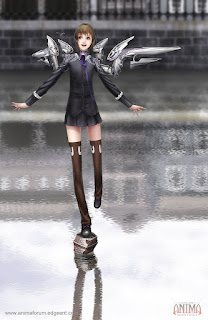 I have been on a bit of an Anima Tactics nostalgia trip today, looking at artwork and cards for unreleased characters.

I love the Anima range of minis, I absolutely do, and wish they were still in production - that would help get me motivated to carry on painting them. I have a few which are part-painted and I hope to get some motivation to pick up brushes on some of those soon.

One of the problems for Anima as a brand is there is no real news. There have been hints that Anima Studios is entering into a renewed partnership with Edge Entertainment, with he first emphasis on the rpg line. However, the video game (Gate of Memories) has clearly been an anchor on other developments, taking so much longer to finish off than ever anticipated.

Right now the biggest positive step I wish for is the Gate of Memories physical rewards, but there is still no sign of those. The Extended Campaign Kickstarter page hasn't had an update in over 4 months which is a concerning sign. As it is, if Edge Entertainment are able to begin production on a successor edition to Anima Tactics, I do not foresee that before early to mid 2018 at the very earliest, possibly much later than that. Unfortunately hard information is pretty difficult to come by.