This unit is an unusual one in game terms, but I will get to that later. First up, the painting side of things.

This has been a 'quick and done' paint job (albeit one I am happy with, even if it is not spectacular), simply because I could feel a sense of painting inertia coming on. In the past few years I have undergone a few painting slumps, lasting weeks or even months, and I could feel another one on its way.

What I have learned in that time, is that just getting 'something done', finished and complete even if it is not my best work, can be useful to snap me out of doing nothing at all on the painting front. And given this year I am determined to paint as many minis as possible to make up for the relative inactivity of last year, well I needed to address that as soon as I could, and this was the perfect model for me at the required time. Something that could be done quick and simply, for what is hopefully an effective looking gaming piece. 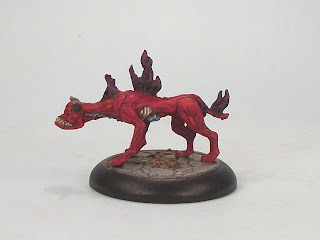 The Hellhound is my 28th Anima Tactics mini, and the 41st mini I have painted this year so far (versus the paltry 24 I painted in 2012; 6 of those were in one month alone). So progress continues!

This mini is unique (so far) in Anima Tactics, as it can be fielded in either of two ways. One option is to use the model as a Type-004: Hellhound, a 25 Level Neutral Black Sun Undead unit; basically a pretty simple fire and forget type of nuisance, particularly due to its Charge and its Dark Hunter ability, with the added benefit of Stealth.

The other option, and right now the one that intrigues me more, is to use the Hellhound as a Level 15 Dark Summon. Again, it is kind of fire and forget, but with the advantage of a free de-buff Action against nearby enemies if the Hellhound kills its target. As a unit it is very cheap, and adds a simple to use extra unit for a Dark Summoner. 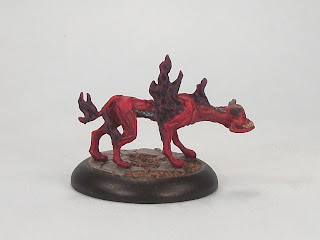 In fact I am so intrigued by the possibilities with the Summoned Hellhound, I plan to add at least one more to my collection, probably to be painted with a colour scheme more in line with my Black Sun units. It also makes nice counterpoint to the cheap Light Summon (Hamadria).