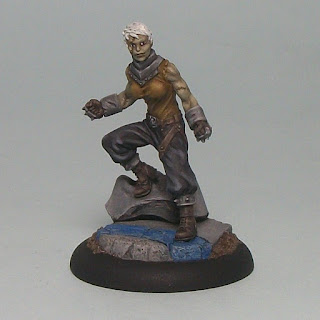 Months have passed, and I have finally completed a new Anima Tactics unit! Spurred on by my Zomtober painting exertions, I was determined to use this month as a spur to getting other tangentially related stuff painted, and for me, Sharsha 'Friedegunde' fit the bill. While she is not an Undead, she has abilities that reference life after death and I thought it would be interesting to use my zombie-skin recipe on her with her patchwork body.

Sharsha is of course one of the four recently released but long-awaited final minis from Cipher Studios/Ninja Division, and I was pleased that they finally surfaced - although two more minis remain yet to be released: Legion and the new Limited Edition Celia.

The initial painting was pretty quick as I went back and forth between this and other minis I have tackled for Zomtober. I am hoping that in the last couple months of 2015 I can at least get one or two more Anima Tactics units finished. 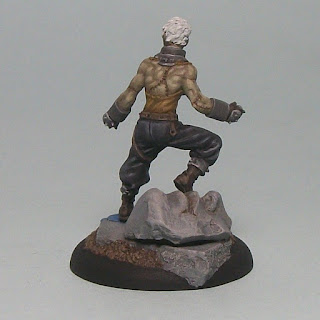 I haven't played the game in quite a while, with enthusiasm seriously dampened by the Cipher decision about the game, but hope to maybe play a game or two soon or early next year. It would be nice to get Sharsha onto the table if I do. In game terms, Sharsha is having to compete with Organization-specific units as well as other Wanderers for the coveted Wanderer slot in a Party (except Black Sun who she cannot work with). Therefore she has to offer something exceptional, and with her Power Token management adding extra options such as instant AP recovery (theoretically allowing for 7 AP expenditure once per game), Healing, coming back from being reduced to 0 Life Points, and increased Speed, then I think arguably she does.

For Advantage Cards, I think the ideal choice is Orb of Power so she starts with 1 Power Token, and meaning she should be up to 2 or 3 Tokens by the end of her first Turn if she also uses her Pure Anger Action twice - that sets her ready to use Limit Break (AP recovery) and just 1 Power Token short of being ready to use Beyond the Grave which allows her to return from being reduced to 0 LP.