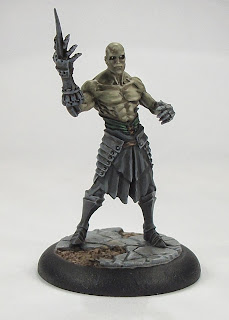 I am pretty pleased with how this model has turned out. It has been assembled for quite some time, and was something I planned to get around to eventually, but with Zomtober underway on one way of my other blogs (click for link), I was inspired to do some Undead painting for Anima Tactics; to that end I made a start on my first two Type-005's (I have three; you can take one per 100 Party Levels allowed). This is the first, and I would like to finish the second before the end of October, motivation permitting.

With a really limited palette, this was actually quite quick to finish: the different areas of colour are skin; metal; black cloth; green cloth; leather straps; blank dead eyes. I chose to use my usual Zombie skin recipe rather than the Anima Tactics 'studio' Type-005/Type-009 skin hue which is a kind of magenta. That does look cool, but I know what I like for my Undead!

Type-005's seem to have taken time to improve in perceived value in the game. At first glance they are quite cheap units with a degree of customization available (more on that with the next Type-005 post). However as Undead they cannot take Advantage Cards, which means that mitigating their inherent limited accuracy (Attack 4; no special Attack or Charge that adds Attack or Damage) is a key issue. Initially their biggest inherent advantage could be that after being taken out, the essentially explode at the start of the next Action Phase. However if your Black Sun Party takes Elite Squadron (Plot Card) and has a Type-009 upgraded to Type-010: Commander, then suddenly taking a few Type-005's means that you can have Attack 6 and Damage 6 units at just 25 Levels cost apiece (Type-005A: Assault). Add to that they have a 12 inch range Attack and the possibility of some annoying spam is unleashed. 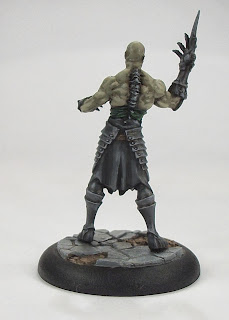 Time to start thinking of playing a Black Sun Party methinks! And time to get painting the other two Type-005's and my Type-009...