Okay, finally got some games in (hey, it only took slightly over thirteen months!), and so wanted to post some thoughts.

Thanks to my main gaming buddy Rob (of Four Color Super Minis - here) for taking a few shots.

Each game after the first introduced something extra, so was probably a wise choice to build up our feel for the game-play.

Models move very fast it seems in Anima Tactics compared to some other skirmishes. Therefore even a 4' by 4' board can be crossed quite quickly. It is important to plan use of actions to stock up Action Points when they are most needed.

Victory to me based on having the last model standing. Azriel was  the star unit.

We introduced Organization Parties, although I forgot about my Organization Advantage completely! I have a few ideas to act as a reminder in that regard!

Again victory for me, with Azriel star unit once more.

We added in Leaders this time, which meant a lot more rules to track, and which makes me think Level 200 games may be better until we have quite a few games under our belts.

We also added in Summons (1 per Party), but ended up making Stability rolls a Round too soon, so we should be okay to remember that properly next time. Wrath of Nature in particular was pretty brutal.

Again I was a bit rubbish at remembering to use my Organizational Advantage.

Rob won this game; he maneuvered his faster units better and played more tactically, so a just result, and one that would have resulted even if I remembered to use my re-rolls. 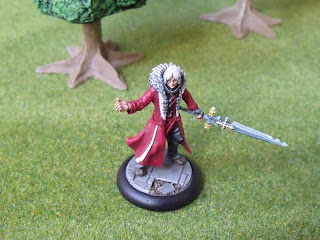 Summary
We both enjoyed playing the game. It probably played faster than I anticipated, even with explaining the rules to Rob, as well as briefly describing the context for thew various miniatures backgrounds.

Seeing Lorenzo knock models flying and follow up with his Dual Buster Action probably was the epitome of the kind of thing we enjoyed.

I enjoyed the games enough to want to play more soon, and of course to want to get more painted.