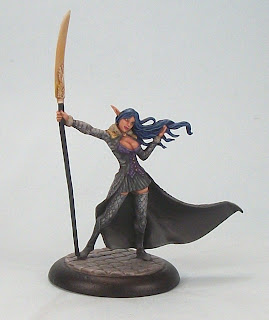 Okay, another one down! And this time around another Optional Leader, meaning that my Organization Party opportunities rare starting to become more rounded. With a Summon and a Wanderer I can make a 300 Level Wissenschaft Party.

I have again carried over the usual black purple colour motif that I use for Wissenschaft onto Valis Ul Del Vilfain, and with this I enjoyed how the scales on her coat came out, even if the photographs do not show them off that well.

With plans to paint up some Gears soon (Theurgia arrived today!), I accept that the big robot-suit things will have a different scheme to the Crows and Arias of Wissenschaft, so ultimately there may be two primary schemes for the Organization.

Valis Ul Del Vilfain is a Sylvain princess employed by Wissenschaft, and is both a capable fighter as well as being a very effective Summoner; her Summons are brought into play for no Action Point cost if engaged with an enemy model. That will typically leave a couple of Action Points to use for something else like movement, Dodges or even an Attack.

We got our first games in today. All were pitched battle type games, and Valis Ul Del Vilfain only featured in the final game (as we stepped up through Levels for each game); and I have to say she was pretty devastating, dropping her Summon into the battle-zone while adding her own formidable attacks. 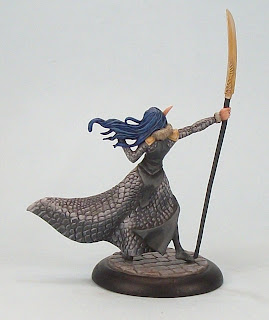 Running Totals
Anima Tactics Minis: 102 (added: Morrigan; Jiang Pao; Lin Pao; Nero; Feng Yi; Damien; Theurgia; and (female) Empire Agent)
Anima Tactics Minis Painted: 16
Painted Minis Percentage: 15.7% (percentage of AT minis owned that are painted; this has dropped but i am happy because my next mini is almost finished, just needing some tidying up over the weekend)
Posted by pulpcitizen at 07:57