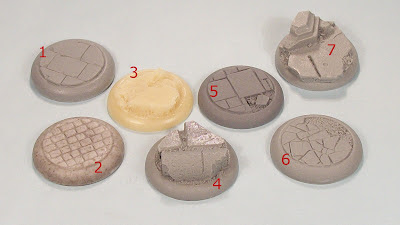 Something I started with my Pulp City stuff was using resin bases. Over time I started to be more selective and specific in matching certain base styles to certain models, although overall a bit of a random selection has been used I guess. Through it all the same grey colour has been used meaning that the bases may look more cohesive as a result. That grey colour will carry over to here.

Learning from that, I chose specific base styles for each Organization (Organizations are basically cohesive forces with a common background, and there are Wanderers who belong to no specific Organisation; the Factions cover the 3 affinities in the game - Light, Dark and Neutral; the Factions/affinities are represented through all of the Organisations - there are no all-good or all-bad guys here.

Consequently I settled on basing according to Organization for the most part, treating Wanderers as a single group here. Summons are supernatural creatures invoked by Summoners who manifest only temporarily in the material worl; for them I have decided to follow the basing for certain Organisations.

Bases Styles
1. Azur - a nascent empire that is emerging to rival the long-standing power of Abel; bases are 'Stone floor' by Dragon Forge, chosen as I thought it helps represent the sense of order and newness I can see with Azur.
2. Wissenschaft - this secretive Organization is constantly researching and discovering; these cobblestone bases (Fenris) should give a more modern feel than the other choices.
3. Samael - a secret society of supernatural entities, banded together against the hostility of much of the human world; I chose a slate/rocks style to represent a more nature-themed force (this base Model Display Products; I am also using some Micro Arts Studio bases).
4. Abel - the declining empire of Abel, pressed on many sides; I chose Dragon Forge's Ancient City Ruins to refelct an Organization that is steeped in history and has seen better days.
5. The Church - intrinsically linked with Abel, but an influential Organization in its own right, and within its duties chooses to hunt the supernatural; I went for an irregular stone-work style to make them look older than the Azur, and the base shown is Dragon Forge's Square Cut Slate, but I am also mixing some similar Fenris bases in as well.
6. Black Sun - a corporation secretly dealing with supernatural artefacts, and in particular necromantic weapons; Broken Wasteland bases by Dragon Forge just seemed to fit best suggesting ruin.
7. Wanderers - not an Organisation, but the name attached to those outside of the major Organisations; I chose Forgotten Empires by Dragon Forge since they have an exotic almost alien feel, and so will stand out against the rest.

Email ThisBlogThis!Share to TwitterShare to FacebookShare to Pinterest
Labels: Bases