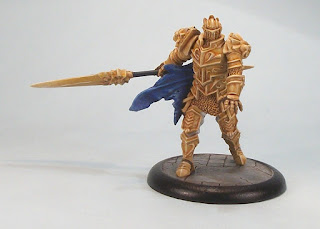 My second Empire unit, and this is a big one.

For those not familiar with the mini, Odin Goldsmith is mounted on a 40 mm base. He is a big beast of a model, even if he does not look it at first sight. Nowhere near Wrath of Nature size, but still 45 mm tall, and his weapon? That is approximately 2 3/4 inches long!

Odin Goldsmith is the warrior incarnate; his background describes that for over thirty years he has been present in every documented conflict and involved in hundreds of secret special operations, that he is an unstoppable fighting machine.

Colour-scheme wise I wanted to stick with what I laid down with Janus Faith, but having no tunic I substituted the blue onto his cloak. Even though there is an established official colour scheme for Empire which I *think* varies by rank, I want a more uniform look for my Empire so I will be sticking with the combination with some exceptions like Samiel. 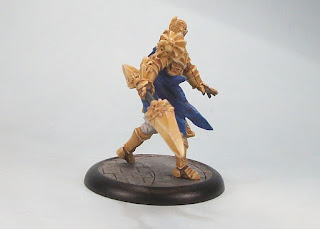 I am looking forwards to unleashing Odin Goldsmith in some games as he has a couple of cool Action, but a really cool special ability (Chain of Blows), which can keep going with the right amount of stupendous luck. It could be interesting to see that ability explode as it were.

Stats wise, he has very high armour, a lot of Life points and attack 5/Damage 6, so pretty hard-hitting. Definitely one to sue Gnosis on to maximize the chances of Chain of Blows.

His main drawback is that he has a relatively very low AP regeneration, but this improves as he takes more damage, although for the best 4/4 he will be close to being taken out, so it maybe worth considering Advantage cards that offer synergy with how he is set-up such as Last Stand (+1 Attack and +1 Damage at below half LP); Talisman of Eriol (re-roll one die); Primal (since you are likely to be using Gnosis etc anyway, he should hopefully hit, and Primal stacks that up); and any of the usual suspects like Supernatural Weapon, Elemental Weapon or Supernatural Armor. 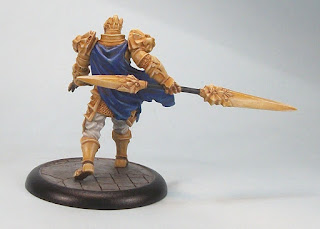 Ultimately he looks like he can be a heavy hitter, but one that is fallible. Definitely want to get some games in with him as soon as possible.

Getting this finished was a little surprising as I had started work on Luzbell at the time, then thought I would do 'a bit' on Odin while she was drying at some points, Then I carried on, and on, and eventually finished him. I really have little control over what I finish and when sometimes! Luzbell is nearly done and I have a few more Empire (Vayl; Veronica; Erika; and Female Empire Agent) in the possibly infamous 'queue', so I hope more will be done soon. That said, I have a painting challenge for another game next month, so that may slow things down a little on the Anima Tactics front, same for August, but rest assured I will keep plugging away. 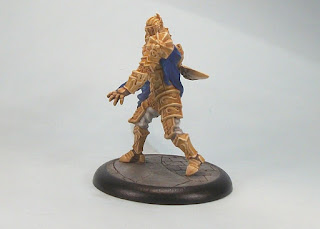