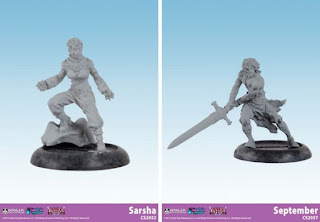 By 'free', I mean the final releases for Anima Tactics have finally begun to surface. This news has been posted on the Soda Pop website about Ninja Division releases for Gencon. From their news story (link):

Four new Anima Tactics models, Nimrod, Sarsha [sic], Anaxamines, and September will be released at Gencon. All Anima models are metal cast.
All items will also be available at the Soda Pop Store while Gencon is running. If you want a chance to get these items early mark your calendar for July 30 – August 2! 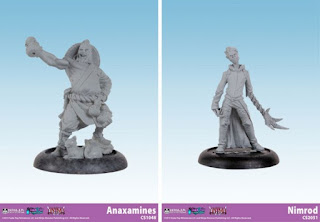 I am very pleasantly surprised that Sharsha 'Friedgunde' is included in the releases; I had privately known the sculpt existed but did not expect it to see released by CS/ND - so well done to them for deciding to release it.

Unfortunately the news story does not answer what is happening with Legion and the Limited Edition Celia. I hope they both get released; for the time being I am assuming they will, and adding Sharsha to the list of expected AT minis (which numbers 160 including these 4 minis, Legion, L.E. Celia and the 2 Kickstarter minis: The Bearer and The Nameless).
Posted by pulpcitizen at 09:33