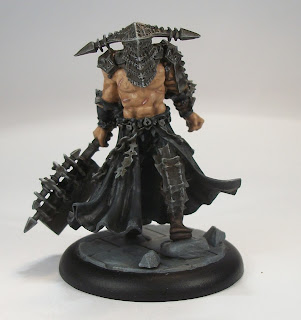 I do rather like this mini; well I like the range immensely. but this one really appeals to me. There is a lyric from a Cult song that goes something like "He's a real heavy dude, in a killing mood" which to me sums up Ligori very well. I think the imagery is just right (sharp edges, asymmetrical armour, brutal looking weapon, chains etc.), and the name is just perfect in my humble opinion. In other words he looks like a 'bad mutha'.

This was a fairly quick paint-job, although broken up into sessions of downtime from some course-work I am doing. The only real tie-in to my planned Azur colour-scheme is the dark/black cloth, but I hope he will still fit in nonetheless. However Azur are definitely down the pecking order of my painting right now, so it will be a while before more are done. At least I think so...

On his Actions and Abilities is where Maximo Ligori gets very interesting if you ask me. This unit is now a few years old, but still fits a useful niche. All his Actions and Abilities are geared to him getting stuck into close combat. One of the key interactions is his Raxxor Slayer Action, which doubles Damage on a Critical Hit; combined with Critical Mastery and a decent base Damage value, and use of Gnosis means he has something like a 36% chance of doing double Damage if I have worked out the probability correctly. Line him up against targets with no significant Armor and less than 16 LP and he has a good chance of taking them out in a single attack unless they Dodge. 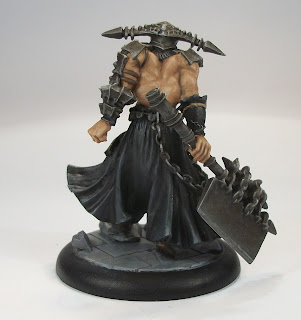 The downside for Ligori is that to function optimally he needs to take Damage in close combat, and although he has good LP, his Armor value is not huge. So keeping him alive is important. That makes me think that taking Raphael's Gift or Heart of Gold as Advantage Card would perhaps be the best option. Alternatively good old Elemental Weapon or Primal adds to the one-shot kill capability he can muster.

Not sure when Maximo Ligori will actually get a run out, but I look forwards to it when he finally does.