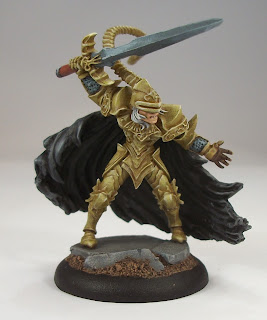 Sudden change of gears here! Black Sun unit after Black Sun unit, then...a Wanderer. Faust Orbatos is one of the earliest models in the range, and one of the few not sculpted by main sculptor Juan Navarro Perez, instead sculpted by Bobby Jackson, and the difference shows. The chunkiness of the sword would not be out of place on a 1990's GW Chaos Warrior IMHO, and does not really do the original concept art justice. That said, it was reasonably quick to paint by my standards (which as ever has the caveat of not saying much!), and allowed me to try a variation on my 'gold' outwith my Empire units where I will stick to my usual approach as far as is possible.

In game terms Faust Orbatos is one of the earliest models rules-wise I would guess, since he was an early model produced, but looking at his card he largely stands up well I think. He has a Ki action which is unlikely to see use, simply due to its relatively low Effect value compared to the typical range of Resistance and alternative units' Effect values that now abound in the wider game. However his two Attacks look devastating. The old version of his card lists these two Attacks as +5 for 3 Action Points (which is great), but apparently the errata says it should be +6. Either way, opponents are pretty much forced to Dodge or be hit. He has good Armour, reasonable Damage and LP, and is pretty fast. At 60 Levels he is quite expensive to include in a Party, but is is a mobile 'tank' with deadly Attacks which is unusual to say the least. I will be very interested to see him in a game sometime. 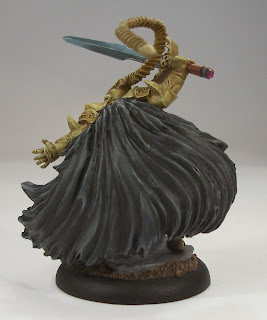 Advantage cards that make sense to me are Raphael's Gift (keeps in the game longer, and mitigates one of his actions); Supernatural Armor; Alinor (to keep him in contact with foes); Heart of Gold (extra LP - nice!); and the usual standbys for Warriors of Elemental Weapon or Primal. Supernatural Weapon seems a little redundant I think.

Faust's background posits him as the last member of the renowned Orbatos lineage, a man marked by a dark destiny. After the destruction of his entire family, he now wanders the world looking for his destiny, even if it takes him to the depths of hell.

Not sure what will be painted next, as painting this was purely down to sudden inspiration, but I hope that either Kira, Genma or Covel could be finished soon, but time will tell on that. Still, more than anything, another one down!