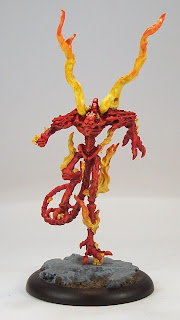 This has been stuck in the dread 'painting queue' for rather a long time. Bits of work were done on it, but very haphazardly from the outset. For example it was initially undercoated in black; then I realised that was a big mistake, so used some yellow spray to re-undercoat  it. Then some of the red base colour got slapped on and I noticed there was some extra gap filling to be done as the red was painted. So it simply got put to one side due to encountering those problems (mostly of my own creation). After very recently painting Maximo Ligori, I had a little bit of renewed motivation, so did a bit of work on Genma (also a very long time in the painting queue - as can be seen from this post here from 20 months ago), but thought to myself, I really had to finish Ignis, Fire Demon.

I did a quick bit of dry-brushing and washes on the red body, and set to work on the flames, before some final highlights to the body of the model. The flames have been the most time consuming, and although a bit of a challenge (reversing the usual progression of dark to light to light to dark from recesses to out aspects of the flame does take a little getting used to for me), I am actually reasonably happy with the results, and very happy it is finally done and finished. Not brilliant, but done, and a real change of palette from the recent Black Sun Undead units and Faust Orbatos and Maximo Ligori. 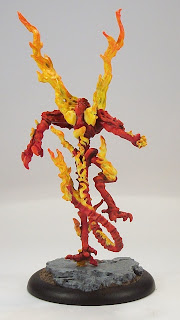 I had originally envisioned having two or three of these, but given how long it has taken me to get around to finishing it, I think I will stick with one. It is quite a tall model, approximately three and half inches from the base to the tip of the flames, so matches the Wrath of Nature in height (but certainly not bulk!).

With finishing this one, I have painted over 25% of the models I have for Anima Tactics. The next one I finish should take me to exactly one quarter of the available range, unless they suddenly release some more in the next few weeks!

Having more Summon options now means I really do need to get some more effective Summoners painted up (specifically Belith, Genma and Covel), and probably at least one more Dark Summon for a little bit of balance. In game terms Ignis, Fire Demon has seen a cost reduction from the 2013 Update. I know from reading the Cipher Studios Forums some players did not view it as a particularity effective unit previously, but there seemed to be some strong points about it that looked good to me (high Damage, base size, its special abilities), so with reduced cost it does look tastier than before. As a summon, there are no Advantage Card issues to plan for, so the primary decision is whether to take the super-cheap lesser form or the slightly more expensive greater form.