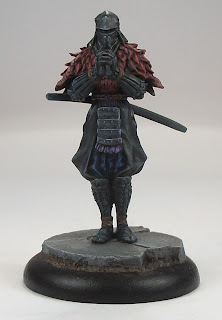 Woo-hoo; another one down, and with the last couple of painted minis I am past 25% of the entire available range for Anima Tactics (technically I think that was the last mini, I miscounted and thought there were 150 when I posted Ignis, Fire Demon, but looking again, it looks like there are currently 148 discrete minis). I am also drifting ever-closer to my fourth 'Next 10' post which is cool. So in the past 12 months I have made a bit of a dent into my Anima Tactics collection, and much more so than I thought I would in November 2012.

So on to Kagemaru. In keeping with my random approach to painting this range (except that recent Black Sun run!), here is a unit out of left field. I decided to go for a dark palette livened up with some dark red, dark blue and purple; that way he should hopefully stand out a little against Azur units who I plan to go mostly 'black' for, with a white accent on their neck frills.

Kagemaru is the legendary master of the Asakura ninja clan. So a super-ninja, with mystical powers and a bit of Summoning to boot! As an Optional Leader, he excels in spamming Shinobi into a Party list (with a cost break and raises the number limit), and allows for some unusual builds that still count as Organization Parties, even if lacking many actual Organization units. 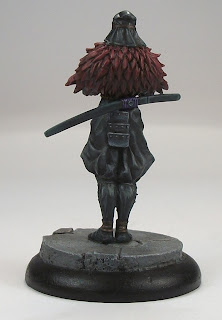 Kagemaru has a lot of Actions built around his Stealth; in the games we have played so far Stealth has yet to feature at all, so it will be interesting to see how it plays out. On the looks of things though, he looks like he could be devastating with options of a 11/8 Attack from Hidden/Stealth, or a 16 inch range Charge that is 13/4 for which he does not have to be Hidden. Ouch! Essentially even without buffing Kagemaru, target models are going to have to consider Dodging or take a big hit.

On the Advantage Card side of things, Primal seems ideal for adding to deadliness of his first attack (his first Charge as 13/7 then stacked by a support unit to become more decisive), but I think I would more likely take Clock of Cronos (to ensure he has enough Action Points), or Familiar if he takes a Summon.

In addition, if rumours prove to be true, Kagemaru will form half of Team Twin Shadow with Zenobius which will allow a very ninja-heavy Party if a player chooses!

As for what next in my Anima Tactics painting? I am giving up making any kind of promise or prediction for a while, so let's just see what comes up!