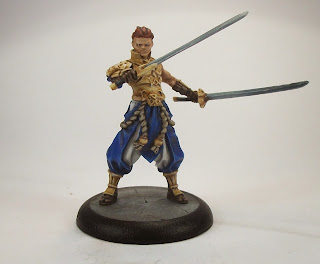 Another Anima Tactics unit finished, and my 36th mini from the range in 2013.

This was yet another mini I loved from first seeing it, so much so that Sho sneaked up the painting queue from when I acquired him! I have been struggling with two other Empire models for quite some time, one of which may go into the stripping bath, and so it is a good feeling to get at least one more done.

I had thought that my Empire Party would be larger than it is by now, but as I say, a couple of models I have struggled with.

At first examination Sho does not look too hard hitting; his 3 AP Bushu Special Attack is at a basic Attack 5 Damage 5, although it does give him Healing if it hits. Compare that to Celia's Tear of Illusions which is 10/3, or Drake's Dragon Overdrive at 8/8 and it looks lacking, except that Sho adds Damage (and Attack with Bushu) the lower his Life Points total is thanks to his Kurokami rule). That sets up a situation where he benefits from being Damaged, but with Defense 9, Armor 2 and 13 LP, Sho is not particularly durable. Which in turn makes me think he will take a bit of working out and getting used to, if I am to use him effectively. 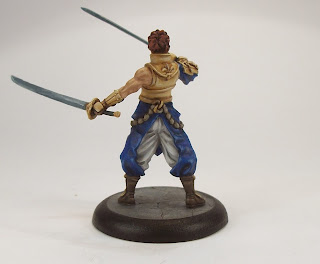 The mini comes packed with an Advantage Card that buffs his LP (Heart of Gold; adding to the utility of Kurokami). Another synergistic option would be Last Stand, adding to his Attack and Damage at below half LP - functionally that means at 6 LP for example he would add +3/+3. Something else for me to ponder.