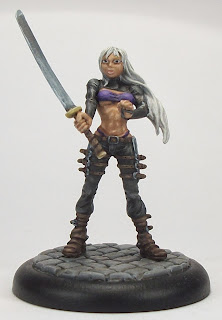 Gotta paint 'em all! Yet another Anima Tactics mini painted by me, hot on the heels of Genma, and this one feels like more of a milestone than any of the preceding 39 did. I know that sounds obvious, but 40 minis painted seems like a nice, substantial number (heck, it is more minis by far than my last WH40K Grand Tournament army which was a meager 27 models; all Terminators mind you...). There is a sense of satisfaction having hit 40 minis painted for the range where just over a year ago I had been stuck at painting none of these.

So this is Celia; there is also a limited edition version, but that will be purely for painting and is never likely to be a gaming piece (except maybe at home). Celia is a Wissenschaft Warrior and is, I think, one of the older models in the line. That said, despite having quite a simple selection of abilities and Actions, and being an older unit, she still looks pretty useful to me.

In line with many non-Gear Wissenschaft units, Celia looks potentially quite fragile (no Armor, fairly low Life points), but this is made up by a decent Defense value and an excellent enhanced Dodge. Her special Attack looks a very good option too. She suffers from low Damage value, but using her main Attack she is likely to hit most targets, and using a Gnosis roll will have a good chance even against many Dodging targets. So using her against against targets with decent Armor or Life Points is less than ideal, but against more vulnerable options she looks like she could shine. I am also rubbing my hands at the thought of eventually trying her out with Dereck Shezard and Rayne as masters of Neokinesis; a true speed team with great Action Point recovery potential in the right circumstances. And compounded that both Celia and Dereck saw cost breaks in the recent update from Anima Studios Project/Cipher Studios/Edge Entertainment. 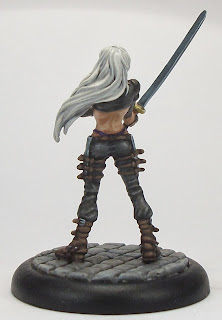 Speaking of 'circumstances', a Party featuring heavy use of Neokinesis demands that the Neokinesis Magnus Plot Card is used to maximize returns; I really need to think about the game-based timing issues required for that!

This year I have painted quite a few Anima Tactics minis (by my standards that is!), and if I can get another one done before 2013 concludes, that would make 36 for the year, or an average of 3 per month which would be a nice achievement I think.