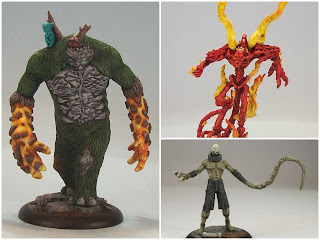 Damage Resistance is a quality that crops up in the rules for a number of units. It is not an 'Innate Ability', therefore is unaffected by the Seal State.

In essence Damage Resistance is a rule to model that slow or cumbersome units will find it hard to evade blows. Thus some Undead units have the rule (especially the more common rank and file types), or big lumbering things like Wrath of Nature.

Damage Resistance offer a mixed bag, with generally more downsides than up, but even then, it is something that can be factored into play-style. Damage Resistance prevents a unit using Dodge, which while at first sounds like a handicap, however could arguably worked with if playing a more attritional and aggressive style. On the plus side, a DR unit never loses Action Points from Falls or Crashes; however those may be less common threats depending on terrain available and usual opponents faced.

The key thing then to me is simply that it in fact eases decision making; you don't have to worry about an Action Point being pulled out for a Dodge, thus scuppering your opportunity to pull off an uber-Action, or worse still worrying about taking the hit and the consequences thereof. Nope; hit happens, you see what the effects are, then move on. Like I say, well-suited to a more aggressive and attritional play style.
Posted by pulpcitizen at 03:03