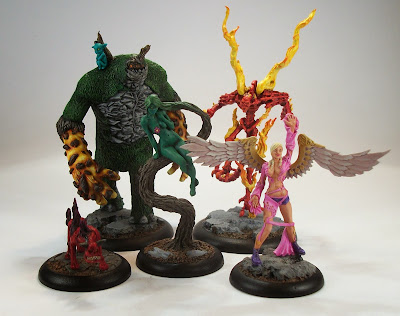 I love the concept of Summons for Anima Tactics, I really do. They draw from elements seen in a lot of turn-based Japanese console rpgs, and so perfectly evoke a particular aspect of the material that clearly inspired  Anima Tactics.

Summons are beings from elsewhere invoked to aid a Party. Immediately, most can be seen to reflect a particular elemental idea; not only in the sense of the classical four elements only, or even Eastern traditions, but also in a basic primal type of force such as light, darkness etc. Not a new idea in gaming by any stretch, but one I feel is handled fairly well in this game. So far there are nine Summons (five Light Summons and four Dark Summons), so I still have four to paint, but I hope that the game's creators do get around to adding more.

Sharp-eyed readers may notice that the Ignis, Fire Demon looks slightly different to the version in the last blog post; I did a touch more work on the top-most flames to finish it off after taking this photo.

Each Summon has a distinct role, and with the 2013 Update many have undergone a price reduction (with a couple of notable exceptions). So with the array of Summons available, a wide range of options are opened up.

Atman is a reference value in the game to give an equivalent Level value when a Summon may be affected by a Level dependent ability; for example abilities that do not affect Level 50 and above would not affect Atman 50 and above and so on.

What I really look forwards too are the Aeons. There are various mentions in the rules for the units, but we have yet to see any. They occupy two Summon Levels so the inference is that they are powerful. I have a gut feeling they will be big and mighty avatars of power; I am guessing Morrigan size possibly. I hope we do get to see these ultimate Summons eventually, and preferably sooner rather than later.
Posted by pulpcitizen at 03:56