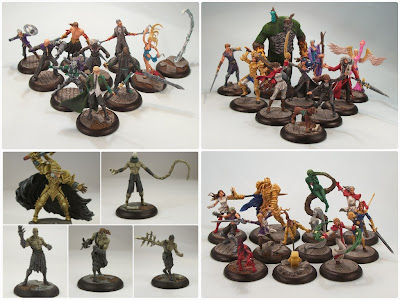 Back in December 2012, I posted a 'Progress Report' for my Anima Tactics painting. At that time I was struggling for momentum, and needed the post to help me focus a little.

In that post, I set out the grand expectation of painting twelve Anima Tactics minis in the following twelve months, averaging around one mini per month, and expecting to do a quarterly update. Well, regular readers know that I update my running total with each new mini, and as for that target; well, I have now painted thirty two minis in less than eleven months!

On another note; in March 2012 I showed off my first nine prepped Anima Tactics minis. Of those nine funnily enough, only four have been painted! So I have managed to be distracted on at least thirty occasions!

Going forward, if I can average 3-4 minis per month it will take me around 3 years to paint everything I have, plus stuff I still want to pick up, as well as hypothetical new releases. In the past eleven months I have had a couple of fallow months, which have been compensated by much more productive months, so I hope that I can sustain the current overall momentum. Stay tuned to see how I do!