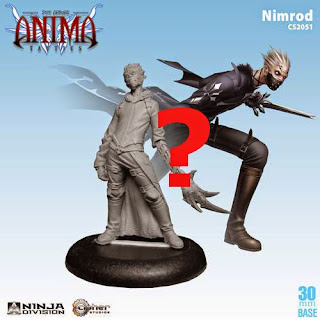 It has been more than two months since I last painted anything from the Anima Tactics range. That saddens me because that means my enthusiasm for what I feel is one of the strongest ranges of minis I have ever seen has waned.

I know why, and it does relate to the discontinuation of the range as announced by Cipher Studios. I think it is harder to be enthusiastic for a 'dead' game/range, or maybe that is just me.

I had hoped that as announced we would have begun to see the last of the unreleased minis (such as Nimrod, right), but almost 8 weeks after Soda Pop Miniatures started being the online stockist in place of Cipher, they acknowledge that they have yet to receive stock for the remainder of the range from Cipher (they currently have less than half of the product SKU's as far as I can see), let alone those unreleased minis that were promised.

I will complete my project. I am determined and sure of that. I just expect it will now take longer than previously anticipated unless I can get some unexpected motivation. I will have a look at what I have part-painted and under-coated and see if there is anything quick and easy to get done soon, just to get something going on the blog again. Please bear with me.
Posted by pulpcitizen at 09:31