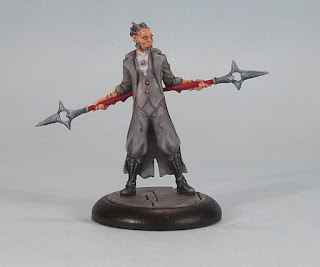 Yes of course, inevitably yet another Warrior! I promise that at some point some other classes will see minis painted up, honest, as well as some more models for the Dark Faction.

Grey is my first Church mini, and I have lined up a few others from the same Organization so I can try out a Level 200 game to see how Organization Advantages play out.

Grey is intended to be a 'tank' or 'bodyguard' of sorts through reading some tactics posts on the Forums, and looking at his Actions and abilities.  While a fairly decent Warrior looking at his attributes, and for his Level, he has a unique ability that prevents him from taking out enemies, so he needs to be used in tandem with an ally without doubt. 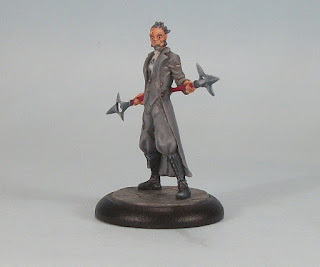 I love the idea of the grizzled veteran, which is picture Grey as, and I painted this mini up in tandem with Clover as a conscious effort to step away from the 'dark palette' of the first three minis I finished.

Red is going to be a motif for my Church units going forwards; I will try and work in at least some red into all of their schemes if possible. While some minis will suit it, others may prove a little trickier, so time will tell on that plan.

The 'studio' version of Grey has him bedecked in white; since my Saints will be in White, I wanted to paint him in a way that would stand out from that, and from the darker hues I plan for units like Lostaroth Marchosias. I am sure it will work out as planned, or vaguely like as planned!

As I finish more and more Anima Tactics units I am getting increasingly itchy to try the game. Hopefully by February or March I will have painted enough to have a few games trying a few different models and Party combinations. 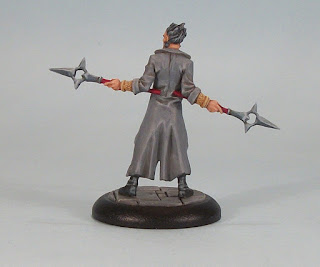 So five models painted for Anima Tactics this month. the down-side is that my percentage painted is about to drop imminently as I have a few more minis ordered and en route. Oh well...