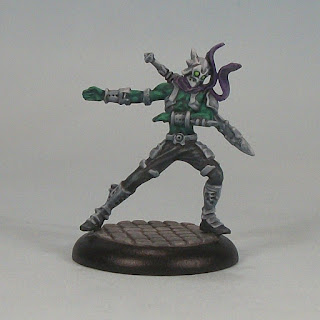 Hiro's background posits him as a boy reborn after an accident and rebuilt as the hero of his wildest dreams. He sees himself as an 'Avenger Ranger', a hero of justice, something he sees in the other Crows of Wissenschaft.

I love this nod to the Tokusatsu shows known to most of us in the west through Power Rangers, Masked Rider and V.R. Troopers. The rules of this guy emulate my memories of those shows, as perfectly demonstrated by his Posing rule; when Hiro defeats an enemy he has to expend an Action Point (or suffer Slow Level 1).

I have yet to play Anima Tactics, so I do not have a clue how he plays in the game, but I can guarantee that even when I have a few minis ready for my first games, I wholly expect Hiro to get a few outings! 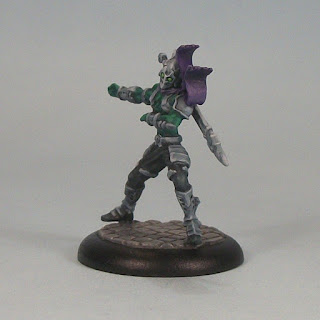 I am pretty happy with how Hiro turned out, although I may do a little more on a couple of the areas of 'metal' on the model.

Hiro was started before Dereck Shezard, but it took until I felt I had enough focus and motivation to finish him off (if indeed he is finished) in a few stints.

I am pleased with how the figure looks in the pictures, and it probably photographs a little better than it looks in hand to be honest. That said, I definitely need to add some 'lighter' palette minis in my Anima Tactics selection I reckon; there is a lot of 'dark' going on so far. Well across the three minis if that counts as a 'lot'.

Other minis that are base-coated include: Akio Kageshima; Bael; Dark Cheshire. 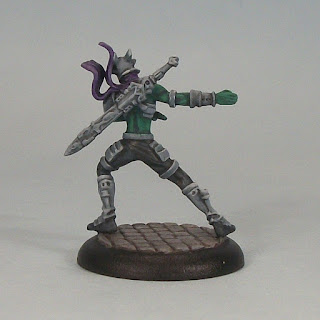 I have a few other minis based and ready, but no under-coating: Covel; Deimon; Juliette Kaim; Bella and Aqua; Ingnis, Fire Demon.

Not sure which of these will be finished next, or whether something else will jump the queue - so stay tuned to find out!
Posted by pulpcitizen at 12:21