Wow. That took longer than I thought, or ever anticipated - finishing and posting my first Anima Tactics mini that is.

I only started Dereck Shezard very recently, despite having a couple of other minis in an almost completed state, but he got painted pretty quickly and I am glad I have finished one of these at last.

I love the visual ethos of the Anima Tactics range, and as a fan of games like Final Fantasy VII, FF VIII, Wild ARMS and others from the 90's, it is a game that pushes so many of the right buttons for me. I wish more of the minis were single piece casting like this one, but alas that is not the case. It won't stop me painting my way through this line, but it will slow me down, and as an admittedly very slow painter already, that is surely a funny notion.

I want to get playing this game sometime early next year, which means I reckon I will need around 6-12 minis at minimum to get started. And while I have plenty of the Anima Tactics line to do that with, my painting inertia will be the biggest hurdle without doubt. 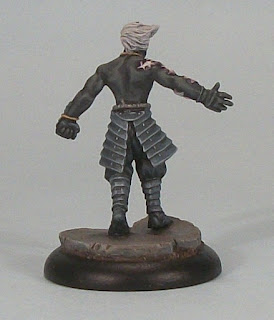 Anyway, I am fairly pleased with this one; not my best paining ever, but some touches I am rather happy with. Hopefully Hiro and Kingsley Warlock will move into the 'finished' pile sooner than later. Watch this space.

Game-wise I have no idea yet! But his nickname is 'Godkiller' and he is one of he higher Level models in the game, and he is not a Leader which seems to bump the value of some characters up a little in comparative terms, so in all I expect he can kick some bottom when needed to do so.
Posted by pulpcitizen at 11:11