I am due to get in my first proper games of Anima Tactics in April, which will be against my main gaming buddy Rob.

Before then I thought I would trial on my own what I plan to use for the first introduction - a simple two on two game pitting Lostaroth Marchosias and Grey against Hiro and Lorenzo.

The game saw some basic Attacks; Charges; Special Actions and Special Abilities being used - all good. 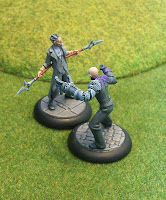 I was able to recall the basics that I needed; remembered to use Dodges; got a better feel for Action Points management. All in all pretty successful.

What was evident, and I had a strong inkling about this, was that by Turn 2 at most you should be able to engage Enemy models in base to base.

In only 3 Turns of play I felt comfortable with the basics of the game, and had employed a few different Action types, all of which bodes well for introducing others to the game in time I hope. 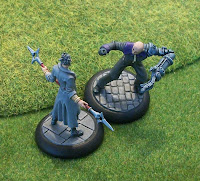 Bring on the proper gaming!
Posted by pulpcitizen at 14:00