This one was *mostly* finished around a week ago after a period of on-off 'work in progress', but when looking closely I realized I had initially missed the lacing on her crop top, so that was rectified a few days ago. Considering I did not expect to do much Anima Tactics this month, this is my third for July!

Alessa Raincross is a Wissenschaft Crow and former bounty hunter who was caught in an explosion when she hunted the assassin Vayl. Her legs were replaced with technological prosthetics and subsequently she joined the ranks of Wissenschaft.

There are a few gun-toting female characters in Anima Tactics (others that come to mind are XII, Cordelia and Kira, both also Wissenschaft; Valentine from Empire), so I am happy to get one done as a contrast to the regular 'huge swords'! 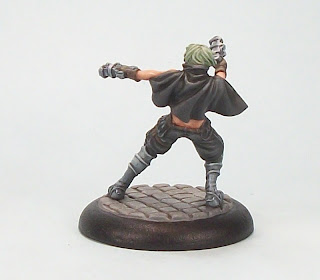 Game-wise Alessa Raincross is very much focused around her Ranged Attacks. In addition, like most non-Gear Wissenschaft units she can have 2 Advantage Cards attached. Assuming use of the Lost Loggia Organizational Advantage, then she can be loaded up to make a very effective sniper type based on he Stealth Action.Therefore the Nue Advantage Card could be useful to make Alessa harder to find when using Stealth; or perhaps Covert Operation to allow Alessa to gain Advanced Deployment. Finally anything that stacks with Attack or Damage is inevitably useful given her focus on Ranged Attacks.

With my Wissenschaft shaping up, a couple more would be nice before I switch focus to the Gears.

Running Totals
Anima Tactics Minis: 135 (added: nothing new since the last update!)
Anima Tactics Minis Painted: 25 (a few more are in the dreaded queue)
Painted Minis Percentage: 18.5% (percentage of AT minis owned that are painted)
Posted by pulpcitizen at 11:06