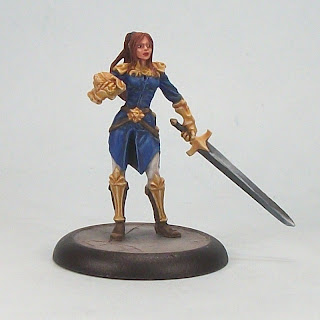 Okay, okay; I did paint more minis for Anima Tactics than I hinted at near the beginning of June.

It has been a productive month for me, with 4 Anima Tactics minis, and 4 Freebooter's Fate minis painted (see here for my Freebooter's stuff), taking me to 34 minis for the year so far - I only painted 24 in the 12 months of 2012, so far so good then in terms of my productivity.

This is my second Agent, and means I am up to 155-175 Levels of Empire depending on how the Agent is configured. It looks to me that the Empire Agent can be made a very solid unit, with Armor 5 a very attractive option (I think my go to set-up will be to recover 3 Actions per Turn; +1 Attack and Damage; +3 armor for Armor 5).

With this mini I am up to 4 Empire units so far, and I am hoping to add Lilith as a Leader model making a potential 250 Levels, which in turn will be fairly easy to round out to 300 Levels with a Wanderer or an appropriate 50 Level Empire unit added. 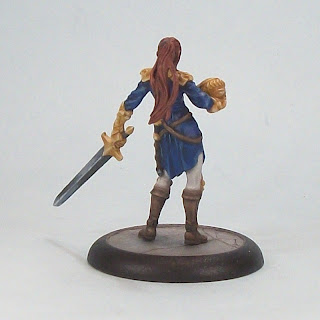 For Advantage Cards, while it might me tempting to add Supernatural Armor, I think that is too costly to justify, so probably a simple Elemental Weapon to make an okay close combat unit. If taking a risk that I am fighting someone without decent anti-Armor, maybe Raphael's Gift to 'tank' the Empire Agent up a little.

Running Totals
Anima Tactics Minis: 135 (added: nothing new arrived yet, but one or two on order)
Anima Tactics Minis Painted: 26 (a few more are in the dreaded queue)
Painted Minis Percentage: 19.3% (percentage of AT minis owned that are painted)
Posted by pulpcitizen at 13:51