Considering I thought I would not get many Anima Tactics minis finished this month (even having finished Hamadria when I posted that though), this is my second for July, and I have a third 95% done. So more than I initially thought then!

Erika is a teenager who wields incredible destructive power through her hammer, Mjolnir, and is the youngest member of the Empress' Hand.

I love this mini; it is such a fun pose that I think it is one of the best in the range, and since I rate the bulk of the Anima Tactics range very highly, in turn that makes this one of my favourite mini concepts ever.

I really do love this sculpt. 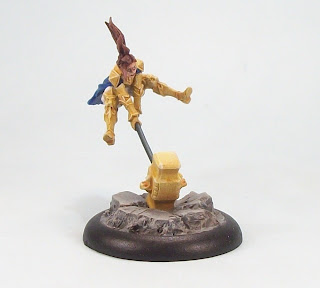 That said, I wish they had either opted to cast in resin, or had chosen to sculpt a grip onto the hammer so the haft could have been easily replaced with brass rod - as it is I do not think that will stand up to too much handling, and so it may only be used sparingly as a gaming piece. I am not even sure it will keep the mini in position even without handling as the metal is pretty soft. That said, it is a brilliant model in my opinion.

Game-wise Erika has some of the usual traits of Empire units including Armor; high-ish Damage value. These are complemented by a fairly decent Speed value and some pretty unusual Actions, including Action Point removal; small radius area of effect; one-shot Taunt which induces Berserk - useful for disrupting units that work outside of base to base or use non-damaging Actions.

Did I mention that I love this mini by the way?

Erika has the colour scheme seen on my other Empire units (Janus Faith; Odin Goldsmith), and I think it should look effective in contrast to Wissenschaft and Church Parties. There will be a second Empire scheme for the likes of Samiel, Iosara etc., but I am still trying to work that out since I have a few Organizations with predominant use of black. 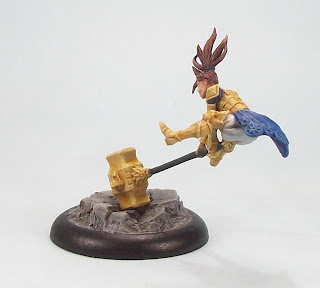