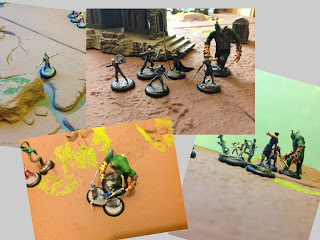 A quick update as things may be slower on the Anima Tactician for the next couple of months than they have been as I try and get some Freebooter's Fate and Pulp City minis finished.

We played another game a couple of days ago, and this time we specifically took some pictures of the action as it unfolded. I *think* I have enough to put together a battle report so watch this space for that in the next week or two.

The battle report will use Comic Life as with my Pulp City battle reports, but presentation will be slightly different than those, with a bit of a different spin I expect.

I have also finished another Anima Tactics mini (eagle eyed readers may spot the new mini in the picture above!), which featured in the game, and I should get that one photographed in the next few days.
Posted by pulpcitizen at 10:50