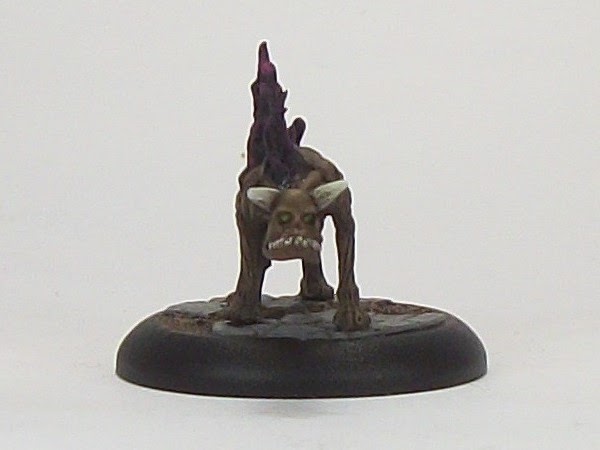 This is my second Hellhound/Type-004: Hellhound (the first can be seen here - click for link); and painted slightly more in keeping with my Black Sun forces this time, and alongside the Type-020: Verrier I posted a few days ago. Hopefully the upcoming picture of my Black Sun units together will bear that out.

I picked this model out to paint last week almost as soon as it arrived in the post, as I wanted something I could finish quickly and easily and because as much as I don't really enjoy painting that much (I am a gamer first, painter second I think; I want my gaming pieces to be painted though), I did quite enjoy the first one as something quick and easy to do, and this was no different thankfully. 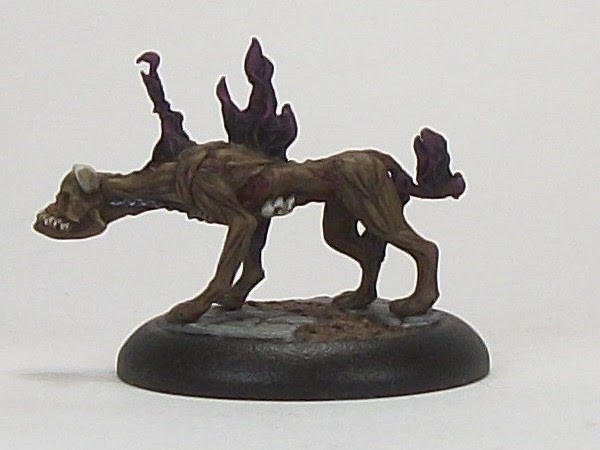 I hope that I can overcome the lull I have been in and get a move on through some more Anima Tactics units sooner than later, I'd like to get to 50 painted models for the game before the end of May, preferably even sooner (although I wonder if the end of April is a goal too far!).

I have a fair number that have yet to be used in games I have played, including the Hellhound/Type-004: Hellhound. Looking at this unit's rules again, especially as a Black Sun unit rather than as as Summon, it looks like a fairly cheap but potentially decent unit to harry and harass weaker support type enemy models. As a Dark Summon it is incredibly inexpensive at a mere 15  Levels.

I have a number of other Anima Tactics minis part-painted as well as dozens undercoated but not yet started. If I was a more disciplined painter I would start cranking through the partly done units I have, however I can be a bit of a gadfly when it comes to getting minis finished so that remains a forlorn hope I reckon. Maybe I ought to shame myself publicly by posting a pic of all the minis that have had some paint splashed on them? Or, then again, maybe not... :) Anyway, this is my 45th Anima Tactics mini painted, which is pretty good going for a game that typically can be played with around 4-8 units at a time. Still, I really do want to paint at least one of every mini for this game, so that goal remains intact. Please stay with me and with the blog over the next couple of years to see how I get on with that ambition!