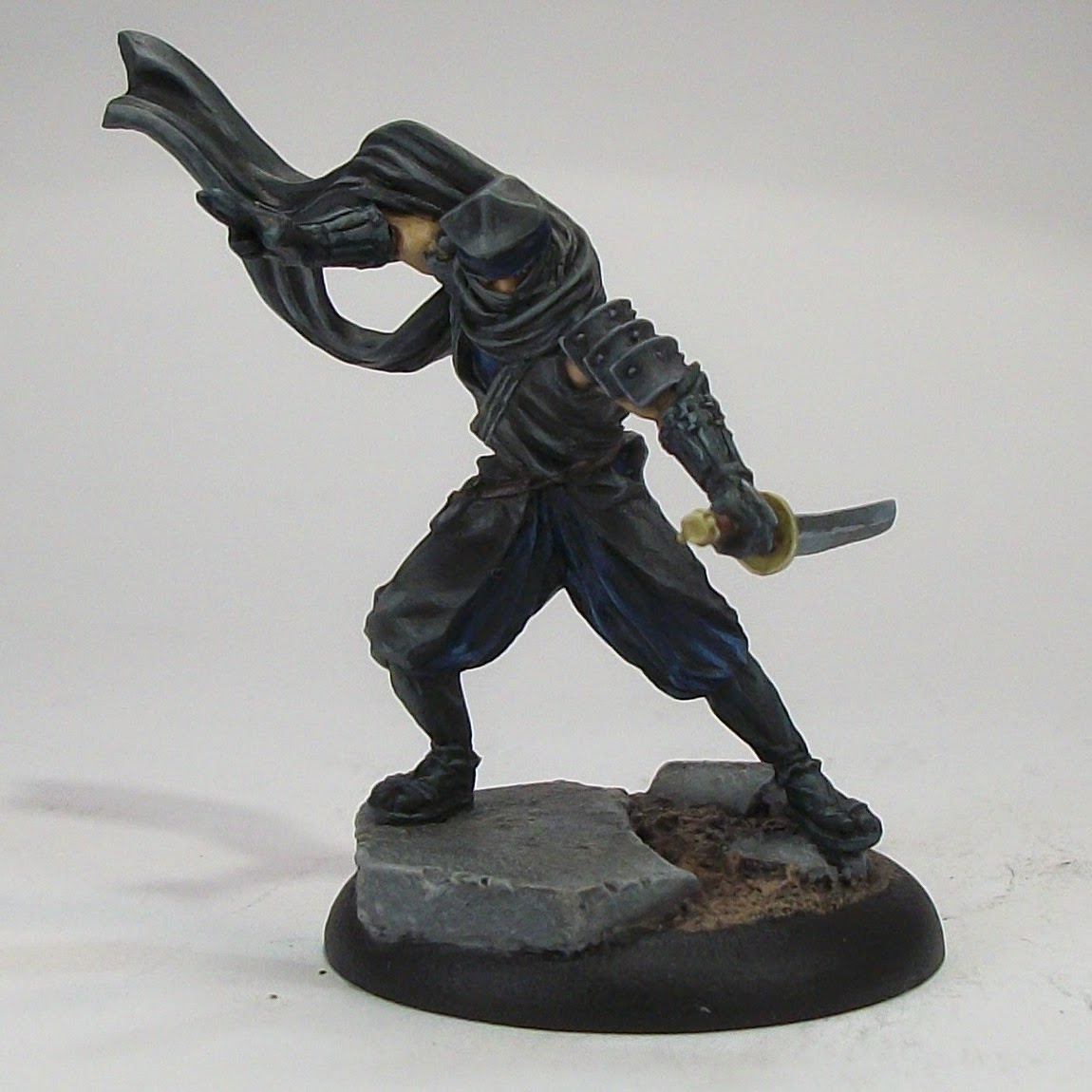 Ninja! Essentially Wanderer ninjas, Shinobi are non-unique units for Anima Tactics, described as elite assassins said to come from the Eastern island of Varja. I like ninjas (I have painted 8 so far for Pulp City!), and so eventually I would like to paint a few of these (more on why in a moment), and I do currently have another available in the mound of blisters.

Shinobi can be taken once per 150 Party Levels, so usually one or two in a typical Party. Unlike other Agents (so far!), they can be included in Organization or Faction Parties (currently, other Agents may only be used in Organization Parties - not in Light or Dark Parties). However, there is also an interesting wrinkle with Kagemaru when used as an Optional Leader; then his Master Shinobi and Elite Shinobi abilities allow you to field a ninja squadron - he allows up to two additional Shinobi, with all Shinobi having a reduced cost! Use them in an Azur Party with the Shadow Lords Organizational Advantage and suddenly you can have Kagemaru (as Optional Leader) and 4 Shinobi with maximum enhancements, all for 155 Levels versus the usual cost of 200 Levels (basically a 'free' extra unit). Add more Prowlers such as Dagger, Harod, Kyler or Kirsten, and the cost break continues. Assassin force! All that aside, I would rather have another Shinobi sculpt before investing in a third and fourth. Right  now however, there is no sign of another sculpt appearing but I will remain hopeful as other Agents have had two variants.

On the colour scheme, I had started painting the whole uniform dark blue, but I did not like it, so I dropped the mini into the stripping bath (Dettol; works a treat, and best stuff I have used so far). I re-started using 'black' (dark grey) as the base for most of the mini, and keeping the dark blue to add some contrast, which was a motif I started with Kagemaru. I will keep this colour scheme going forward for other Shinobi, but altering the position of the dark blue to break up the uniformity a little. Most importantly, my 2014 painting target is almost  back on track across all lines after losing a month in February (I want to manage four minis per month, plus another couple somewhere across the year), and for Anima Tactics I want to paint around three minis per month on average; so far for this year I have painted ten Anima Tactics minis, so I am down by two.

Running Totals
Anima Tactics Units: 156 (added: nothing, but currently several mins are on order...)
Anima Tactics Units Painted: 52 (50 different models; technically as September has not yet been released, that is one-third of every mini I have, and one-third of those actually available!)
Painted Units Percentage: 33.3% (percentage of AT minis owned and painted)
Anima Tactics Range: 151 units (including 2 LE minis; added September as he is due for imminent release)
Percentage of Whole Range Painted: 33.1%
Year to Date Target: 11 of 12 units (3 per month target; 91.7%)
Posted by pulpcitizen at 10:57